For parents expecting a child, one of the most exciting moments during pregnancy is that first, prenatal ultrasound. It can also be a scary time for mothers that have higher-risk pregnancies. Obstetric ultrasounds are performed for many reasons including confirming pregnancy and assisting with determining the date of conception. Sonograms may also be used to detect multiple births (i.e. twins) and even ectopic pregnancies (abnormal pregnancies where the fetus is developing outside the womb). Obstetric sonographers may perform ultrasounds on pregnant women to detect abnormalities or signs of congenital diseases, particularly if the female is high risk due to age or medical history.

These highly skilled professionals obtain joint certification from the ARDMS (American Registry for Diagnostic Medical Sonography) by passing both the Sonography Principles and Instrumentation (SPI) exam and the OB/GYN exam.  The OB/GYN exam must be attempted and passed within five years of taking the SPI exam.

For uncomplicated pregnancies, ultrasound technologists are there to monitor the growth and development of the fetus until birth. For women who are not at risk, they will typically get an ultrasound once during the first trimester and again at the 18th to 20th week stage, according to the March of Dimes. Women who are at higher may have more ultrasounds ordered by their provider.

Connect directly with colleges and universities. Click below for sponsored program information and to speak with an individual school’s admissions representative.

First Trimester (Week 1 – Week 13)
According to the American Pregnancy Association, several aspects or criteria
may be assessed during a first trimester ultrasound. First trimester ultrasound
is an excellent way to evaluate maternal anatomy, determine the likely
presence of an intrauterine pregnancy, number of pregnancies, perform
measurements to estimate gestational age by measuring the length of the
fetal pole (crown-rump length).

During the first trimester, a sonographer can also confirm that there is a
cardiac activity by visualizing a fetal heartbeat and determine if the pregnancy
is ectopic (implanted outside of the uterus) or molar (when a non-viable egg is
fertilized). Transvaginal ultrasounds may be performed to complete more
detailed, high-resolution images of small/early structures. During a
transvaginal ultrasound, a specialized transducer is placed within the vaginal
canal. This differs from a transabdominal ultrasound in which a transducer is
utilized over the lower abdomen.

Second Trimester (Week 14 – Week 27)
The most standard ultrasound for women who are not at risk takes place
during the second trimester, halfway through the pregnancy, between the
18 th  to 20 th  week. Sonographers often perform a routine fetal anatomic survey, obtaining images of fetal anatomy of the head, chest, abdomen, extremities, various measurements as well as the documenting maternal structures. At this stage, sonographers can visualize external genitalia and identify the sex of the fetus. This mid-pregnancy ultrasound serves to evaluate the health and development of the fetus. At this stage, the ultrasound technologist can also confirm if there is more than one fetus growing inside the mother’s uterus (multiple gestation).

Abnormalities and signs of diseases may also be detected at this stage such as the presence of congenital defects, the incorrect amount of amniotic fluid or miscarriages (which usually happen during the first three months of pregnancy) and stillbirths (which occur after week 20). Signs of Down syndrome may be detected between the 13th and 14th week, according to the American Pregnancy Association. 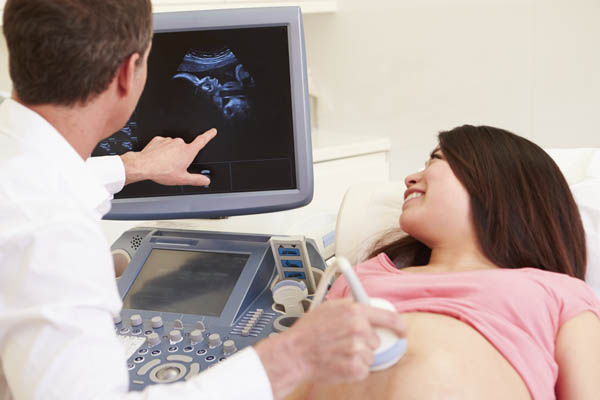 Women who are at a higher risk, such as those who had problems with previous pregnancies, or women who are carrying multiple babies will most likely go in for an ultrasound during the third trimester.

Aside from monitoring fetal development and health, one purpose for an ultrasound at this stage is to determine if the placenta is located too close to the cervix (placenta previa) which may warrant a caesarian section for the birthing process.

A third trimester ultrasound will also be ordered if the OB/GYN suspects the fetus is in a breech position (where the baby’s head is farthest away from the cervix), which also may call for a Cesarean section.

Sonography is a rapidly advancing profession due to technological changes. Sonographers must be prepared to continue their education and adapt to new practice standards and guidelines. Advancements in sonography include three-dimensional/four-dimensional ultrasound. While cute pictures of babies often come to mind initially, this provides the interpreting physician with additional information for gynecologic and obstetric patients! It can be used to further characterize uterine shape abnormalities, detailed fetal cardiac assessment, and fetal structural abnormalities.

The ultrasound technologist’s role is essential throughout an entire pregnancy. If you would like to work in this field of sonography, you can complete an ultrasound degree and complete courses and clinical rotations related to obstetrics or the joint OB/GYN field. Sam Callis is the clinical coordinator for the DMS program at the University of Southern Indiana in Evansville, IN. In addition to clinical coordinating duties, she teaches didactic and laboratory coursework in cardiac and general sonography.

The winner of the Fall 2022 Sonography Student Scholarship is Erica Wiencek from Grand Valley State University.

Please join us in congratulating Erica and the rest of the fall 2022 finalists! 👏 👏🎉